Lists don’t always have to be linear and boring. In this post we’ll see how to add some extra depth to a horizontal list by adding a simple parallax effect.

The base for the example will be a RecyclerView, configured with a horizontal LinearLayoutManager, and we’ll be using a ScrollListener to create the parallax effect.

All code from the example below can be found at my Github page, and the demo app is available for download here: APK@Github

Set up the RecyclerView

First, we need a data class to represent the list items. We can represent a TV show with a simple model class, containing a title, description and an image:

Second, we need a list adapter for Show items. Nothing fancy here, the adapter delegates the view binding to the ViewHolder:

The first two lines are basic — we create and add an adapter and make the list horizontal.

The last row calls setupParallaxScrollListener(), a function that configures the parallax effect. However, for it to make sense, we first need a list item…

This image shows what the item view will look like. We have a title and description text, and we show the Show image as both a thumbnail and the background. 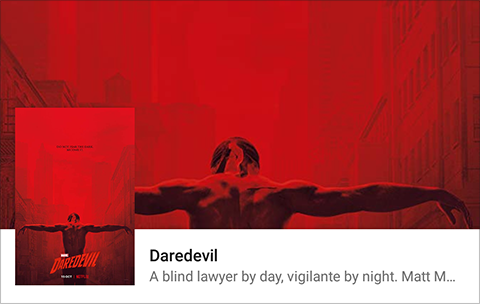 To create the item, we define item_show.xml as below. Note that most of the styling has been removed for brevity (the full implementation can be found here).

(For the full layout, see item_show.xml in the Github repository.)

With the layout done, we need a ViewHolder for the RecyclerView. Most of the implementation is pretty basic: we take in a Show item and bind the text and image to the view. We also add an extra property called offset, which is responsible for adding the parallax effect.

Let’s step through the offset setter:

The offset is relative to the view width, and needs to be limited to the range of [-1.0..1.0] or else the views will be moved too far off the screen.

As you can see, they start and end in the same place, but the path in between is different. When a user scroll a view with its finger, the view moves as a linear function (red ball), which means that the view will follow the user’s finger. Adding a parallax effect means that you want some of the views to deviate from the finger position and move at another pace, but end up in the same place as the rest of the views. To achieve this, you can transform the linear scroll input by passing it to an easing function and apply the result to some of the views, making them move like the purple ball, while the rest of the views move like the red one.

The reason for sending abs(field) to the interpolator is that it expects a value between 0 and 1, and will cap any negative value to 0. So we remove the sign of the input and re-apply it as a direction later on.

Let’s break it down:

Now, the only part left is to apply the new translation to the views that should move at a different pace. This is done by changing the translationX properties for the title, description and thumbnail.

Here’s the meat and potatoes of the parallax effect: let’s first have a look at the code and then step through it.

The code is based on the fact that our list item is as wide as the RecyclerView. This means that there will be (at most) two visible items at the screen at any given time.

And that’s all there is to it. You now have a list with a fancy parallax effect.

So there you have it, the basics for adding some spice to a simple list. Remember, this is just one example of what you can do. To further customize the transition, use the offset provided in this example and play around with other view properties like:

That’s all for this time, have a good one!

Patrick Elmquist is an Android/iOS Developer at Knowit Mobile. He's a caffeinated unicorn of excellence, with an interest in UX and design.

This post was originally published by Patrick on Medium.

Building a Minecraft server with Azure Logic Apps in 45 minutes

How it all started

Friday afternoon, Covid-19 still going around, my phone rings. It is one of the kids with one of the most dreaded questions one can get: “Can we have the password to the router?”