Conferences, because you’re Worth It!

This month I was once again lucky enough to attend the SAS Global Forum, the annual meet-up of the movers and shakers of the SAS world. Part tech conference, part old timey religious revival meeting, it takes place over 4 intensive days; 5,000 people networking, exchanging ideas, learning from one another and finally shaking their collective booty in a massive end of conference blow out. That the forum this year was hosted in Fabulous! Las Vegas – a city with single hotels that have more penthouses than Gothenburg – was especially enticing; I’ve never been to this legendary Mecca of hedonism before and simply couldn’t pass up the chance. Obviously, THAT’s not what I told my boss though.

Instead, I very soberly made much of the opportunities to grow and learn, the crucial need for networking in an increasingly competitive Business Intelligence space, the absolute requirement that Knowit leverage its Partnership status with SAS to deliver maximum value for customers, yaddy, yaddy, yadda, while inwardly I was thinking, “Las Vegas, Baby! Yeah!”.

Now that I’m back in mundane (and snowy) Västra götaland,

my feelings about Las Vegas are complex and mixed; no doubt the successful – initially successful – application of my own carefully worked theories about Roulette and the unexpected crashing to earth later that same day of all my hopes and dreams for a lucrative career in gambling, contributed. As it turns out, I can now confirm that the house always does win, and that furthermore, you really should quit while you’re ahead, but you don’t want to hear about all that.

In a Big Data world of flashing meteors in the pan and once fashionable falling stars, SAS has an enviable track record now spanning exactly 40 years in the Analytics and Business Intelligence Space. Very few companies even come close to having focused on this niche for what - in internet years - equates to a vast geologic age of deep time; as a result SAS can sometimes come across as a bit, well, Jurassic. Since I have been using SAS (some 18 years or so) there has always been an annoying lag in application development, clunky GUI’s and a sense of uncomfortable compromises made to accommodate legacy. Nonetheless, the ability of SAS to deliver the core product, top quality analytics on vast complex data sets, and to keep pace with an exponential growth in data have always outpaced that slight frustration. 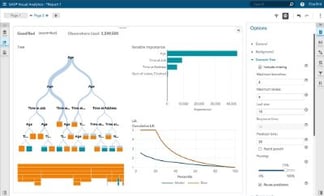 This year though, SAS have really cranked it up a notch, or ten(!) and since the deployment of SAS 9.4 and Visual Analytics a few years ago have been quickly shedding the dinosaur image. At this year’s conference, the most impressive proof of this was SAS Cloud Analytics delivered through the SAS Viya platform: A new cloud based application that may eventually make all that tinkering with stuff in the backend completely redundant. In a nutshell, instead of buying, configuring, building and extensively testing a set of organization specific applications on in-house physical hardware over the course of weeks or months (unsettling fact: this is what my current Project Management work largely consists of), the user simply logs into a browser based portal and selects from a series of apps (such as prediction or scoring) and applies these to the relevant data.

I was pretty impressed and I’m actually something of a cynical curmudgeon. For example, only a genuine curmudgeon would still be using the word curmudgeon.  But hey, don’t take my word for it, enjoy this somewhat stilted demo instead.

Naturally, we weren’t at the conference merely to be entertained by a series of awkwardly pre-scripted infomercials; nope, we really do show up at the conference to learn stuff. To facilitate that it’s always good to have a list of specific questions and have sought out – in advance – who can answer those questions. I’m a clever guy, not a genius or anything, but sharpish, and so this very thing I had done.

The focus for the company I'm at currently, is storage performance, specifically FusionIO cards (which we have opted to rely on heavily for performance in the new environment we are building), and how it can be more fully optimized. We were able to attend a series of sessions on storage, one of them presented by Barry Marson from Red Hat, and myself and my colleagues left with a lot of positive food for thought. While we are on the right track with FusionIO, it’s clear that building a specific tailored RHEL 7 storage profile for our environment is something we need to focus on. The default settings tend to suck, apparently, but they can be fixed.

Another very useful session was a Q&A on Data Storage and performance by Glen Becker, Lead Data/Business Solutions Analyst , USAA. He had some very interesting workarounds for how to manage large volumes of data creatively to limit sorting and processing with a combination of nested views and Hash Tables in SAS.

Also Hadoop! Hadoop was a sort of an afterthought at the last conference I attended in 2012, the talks delivered by unfashionably dressed mumbling presenters in the darker, shabbier venues, but this year was all glitz and glamour and it was everywhere. Just as well too, because our new environment has 4 servers configured for it. It’s clear we can do much more with Hadoop than we currently have planned.

I could go on, but this post is already too long. So, cutting to the chase, the moral of the story: Go to conferences. Do it. Sit your boss down and make the case. Don't take no for an answer. Plan it out. Scope the sessions. Do the legwork. Invest in a set of compression stockings if the flight is a long one. At a minimum you’ll come back with your head full of great ideas and plans, very likely you’ll have at least one solid, implementable idea that will deliver some real value for your company. Besides, what’s the worst that could happen in Vegas?

Lorem Ipsum is simply dummy text of the printing and typesetting industry. Lorem Ipsum has been the industry's standard dummy text ever since the 1500s.

Gone fishin' in the data lake