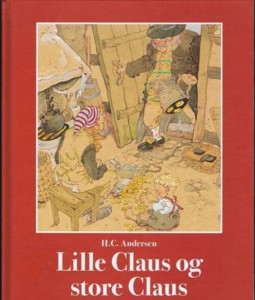 "Good things come in small packages". This saying was disturbingly topical when I last week at the leading Nordic CRM conference Dialogkonfereansen spoke to a senior executive of a large financial services company. He was very talented and successful. He explained how multiple processes affects the customers, described the challenge of training the employees in new and complex products, and indicated that the in-house silos in the organisation caused problems, and he told me that their current target is to move the power of decision-making to the employees that are close to the customers.

He described an organisation suffering from growing pains. The diagnosis is not unique to his company or to the financial sector. It is a general symptom in the big – often admired and profitable – companies that are plagued by their own size. This result in various fundamental problems: Coordinated changes are very hard to carry out. The integration of new ideas across the organisation takes very long time. In a workday full of several conflicting agendas, the company loses its focus on the customers. It is obvious that both innovation, readiness for change, and flexibility are all coveted qualities in a large organisation.

Size – and thereby common practice, culture and tradition – apparently invalidates the functional capacity of the organism. The company’s sensory apparatus, capacity for thinking, and drive wakened. The size and the organizing constitute the problem, and a number of initiatives are taken in an attempt to compensate for this handicap. CRM systems are meant to give the big organisation some of the customer insight that the old fashioned merchant in the country had between his ears, because he knew his customers in person. Performance management – together with a number of other management tools – is to create synergy between the strategies of the management and actual behaviour throughout the organisation and all the way to the front line. Activity-based cost management moves the financial management to the place where decisions about actual activities are made so that the financial aspect is taken into consideration from the start and the company avoids sterile controversies between controllers and business people. The common recipe is to transform the enormous amounts of data to active knowledge and actions. This in itself is actually logical and simple, but size and complexity makes it difficult.

Nevertheless, growth is an indisputably positive word despite the drawbacks of size. We all want “growth”, and we literally mean quantitative growth. Paradoxically, even the small entrepreneurial business looks with envy at the organizing, communication, and capital of the large companies, and the small company persistently aims at growing. But why strive to obtain the growing pains that all the large companies suffer from in everyday life? The entrepreneurial spirit of the small company has a logic and conspicuousness that the large companies can only dream of establishing. This profound meaningfulness is a fantastic asset which the entrepreneurs might overlook in their rush of business. Meaningfulness and passion are the exact qualities that the HR departments of the large companies would bend over backwards to be able to recreate.

Hans Christian Andersen was aware of this paradox in his short story Little Claus and Big Claus: Little Claus with only one horse survives perfectly well by help of keen intelligence and a tremendous readiness for change, while Big Claus with his four horses dies because of his greed and conformity. It probably won’t go as wrong for our large companies, but when they suddenly find themselves standing on burning platforms, I am sure they can identify themselves a bit with Big Claus. He jumped into the sack himself together with a stone, and he himself asked for the sack to be cord up and pushed into the creek. H.C. Andersen lets the greedy Big Claus suffer the drowning dead in his chase for wealth.

Lorem Ipsum is simply dummy text of the printing and typesetting industry. Lorem Ipsum has been the industry's standard dummy text ever since the 1500s.

Gone fishin' in the data lake